Steel is called industrial grain. In 1949, China’s steel output such as rectangular hollow section was only 158,000 tons, less than one thousandth of the world’s total annual steel output. By 1996, in just 47 years, China had become the world’s leading producer of steel. Since then, China has been the world’s largest producer and consumer of steel for 23 consecutive years, accounting for half of the world’s steel output.Recently, China securities journal interviewed li xinchuang, vice President of China iron and steel association and President of metallurgical industry planning and research institute. He said that after 70 years of development, China’s steel industry has been in the world’s first-class phalanx, making outstanding contributions to the country’s construction. 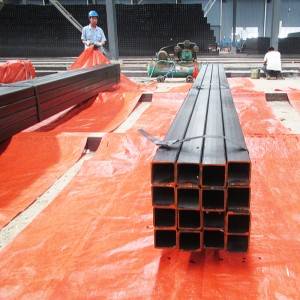 Since 2015, the key word for the development of the steel industry has been “supply-side reform”. As for the significance of the supply-side reform, li xinchuang believes that the first is to unify the ideological understanding, clarify the judgment of the severe overcapacity in steel, and strengthen the determination of the brave to cut overcapacity of structural steel pipe, so that the thinking, goals and actions of all aspects are unified in the central government’s decision-making and deployment. Second, it has effectively solved the problem of “ground steel” that has plagued the steel industry for many years and about 140 million tons of related production capacity has been withdrawn from the market. Third, “cutting capacity” has reduced China’s excess steel capacity. The steel industry has fulfilled the upper limit of 100 million tons to 150 million tons of steel cutting capacity set for the 13th five-year plan. Fourth, China has made unprecedented efforts in the history of the world industry to bring about the steady withdrawal of over 100 million tons of excess steel capacity of mild steel tube, contributed to the solution of the global problem of excess steel, provided China with Chinese wisdom, demonstrated the responsibility of the world’s leading steel country and established the international image of a responsible power. Fifth, steel enterprises have established a new development concept, promoting green environmental protection, independent innovation and other new concepts are deeply rooted in the future development of steel enterprises. Sixth, we have effectively curbed new steel capacity projects that violate laws and regulations. The seventh is to promote the steel industry efficiency recovery.

For the future development of the steel industry, li xinchuang believes that the first is to consolidate the achievements of cutting capacity of square steel pipe, put an end to the resurgence of “ground steel”, seriously deal with new capacity projects, strict supervision of the whole process of capacity replacement projects.