Curtain wall buildings have become the distinctive feature of the modern society today. And various types of curtain wall systems are available for different application purposes. In most cases, the curtain wall design involves a complexity of elements responsible for performing different functions, which is the key prerequisite for holistic approach to building construction and implementation of systems. 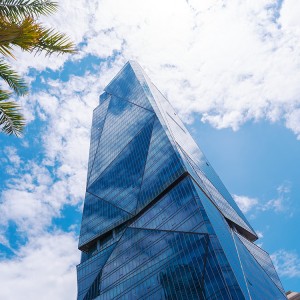 In general, effective enclosure depends on the following factors: static stability, water-proofing, air permeability, thermal and sound insulation, solar protection by shading or coating, energy efficiency, aesthetics, durability and maintainability. Among a variety of curtain wall glazing in the market, structural glass curtain wall makes a hit in the construction field in recent years. In practical applications, despite a widespread use of glass curtain walls and significant technological development in the industry of glass profiles and seals, there are still unsolved problems with glass facades in building construction, such as nickel sulphide in annealed glass, negative thermal effects, corrosion and chemical effects, incompatibility between glass and other materials, water leakage, structural failures, building movements, lack of additional safety measures as well as a regular maintenance and so all.

Furthermore, since it is not possible to perform a critical examination of the entire curtain wall facade system in use, it is also not possible to determine all potential causes of the unwanted events with disassembling the existing facade elements. With regard to water leakage, there are two potential problems: water infiltration due to inadequate hydro-insulation and condensation due to thermal discontinuity. Based on water being localized over the entire depth of the facade and due to substantial quantity of water leakage, it can be concluded that moisture damage is caused by water infiltration from the exterior. In addition, as aluminium curtain wall system becomes much more popular in the modern building in recent years, the elements of aluminium structure should also be separated from new elements in order to prevent the consequences caused by incompatible materials if you would like to use alumimium curtain wall in your project. Moreover, it is necessary to pay special attention to the thermal insulation design as well as to install continuous vapour-tight foil on the inside and hydro-insulation on the outside of the balcony. As for the occurrence of sudden sounds, it indicates that the movements of certain elements and lack of correctly designed dilatation and separation of the elements.